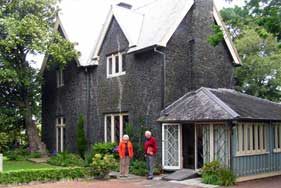 Civic Trust Auckland has had a long-standing relationship with Kinder House, a Category A scheduled heritage building, situated on the corner of Parnell Road and Ayr Street, in Parnell.

In 2006 Civic Trust Auckland began meeting there, and shared office space for several years. Civic Trust volunteers are also part of the guide service offered.
The Gallery is open to the public from 12 midday to 3pm, Wednesday to Sunday, free of charge. The house and gardens can be hired for community meetings and events, private or professional.

John Kinder’s paintings and photographs provide a unique view of early Auckland and many other parts of New Zealand. Further information about John Kinder can be obtained from the View Auckland site at www.viewauckland.co.nz, also the Dictionary of New Zealand Biography at www.dnzb.govt.nz. Various art galleries hold his works, mainly the Auckland Art Gallery Toi o Tamaki and the Hocken library in Dunedin for his watercolours and the Auckland Museum Library for his photographs.

John Kinder’s name is commemorated in a number of places. Kinder House is the most well-known, as a gallery showing his watercolours and photographs, and Kinder memorabilia. There is a street named after him in Meadowbank. The library of St John’s theological College in Meadowbank bears his name in recognition of his bequest to the College of his extensive library.

Kinder House was built in 1857 to a design by Frederick Thatcher, the architect of many Anglican buildings in Auckland, built in the then popular Gothic style. The building was commissioned by Bishop G. A. Selwyn as a schoolmaster’s house for the first headmaster of the Church of England Grammar School, now long since demolished.

The house is of rubble construction, using scoria from Mt Eden, with dressed stone at corners and openings thought to have been quarried at Mt Wellington. Michael Dunn wrote an article for the publication Art New Zealand which is available at www.art-newzealand.com and incorporates a number of historic photographs. He notes that Kinder House was the grandest of three stone buildings constructed in Parnell by the master mason, Benjamin Strange, in 1857/8.

The house was sold by the church and remained in private ownership through to the 1970s. Margaret Newman, a founder member of the Trust was active in helping convince the Auckland City Council to purchase this heritage building and its garden surrounds. Sheila Horton, a City councillor at the time, was the founding chairman of the Kinder House Society, formed to manage the property and operate it as a gallery. Margaret Newman is commemorated by a plaque located within the eastern part of the garden, as is Sheila Horton.