The following letter to The New Zealand Herald was published on April 30 under the heading “Bad fellers are runing amok in Auckland,” signed by Allan Matson, the President of Civic Trust Auckland:

Clearly, the felling of mature urban trees, both exotics and natives, is of increasing concern for Aucklanders, as there have been many objections raised during the last decade, including some very recent ones, not only by the communities in which these trees under threat are located, but also by qualified arborists.

In a climate change emergency, trees have taken on a more expansive role than their already accepted values as providers of shade, a buffer for noise, habitat for birds and other fauna, and visual amenity.

Council’s Auckland’s Climate Plan includes the following under Action area N2: “Grow and protect our rural and urban ngahere (forest) to maximise carbon capture and build resilience to climate change. We need to follow the principles of knowing the benefits of trees in the Auckland region, growing the right tree in the right place and protecting existing trees.”

It surely follows that Auckland Council should heed its own words, uphold the status of any trees that are scheduled, and encourage developers to consider all trees as assets and work to incorporate them into their developments.

Image: Allan with one of the 50 trees CTA planted on 18 August 2018 to celebrate CTA’s 50th anniversary

Below is a letter in response of 4 May.

Below is an article from the Herald of 10 May.

Below is an article from the Herald of 25 May.

Below is a letter from the Herald of 28 May. 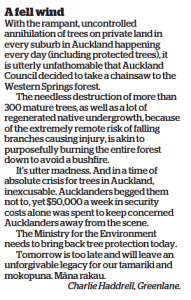 Below is a letter from the Herald of 1 June. 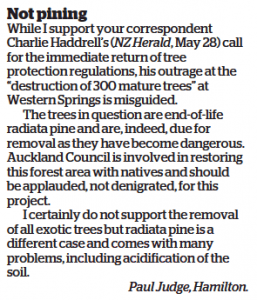 Below is a letter from the Herald of 15 June.