Otuataua Stonefields, situated on the Ihumatao peninsula, north west of the airport and south of the Mangere Treatment Station, has been controversially designated as a Special Housing Area.

The land in question is known as the Wallace Block, and has been owned by the Wallace family since 1856, when it was confiscated by the Crown from local iwi, and sold.

The local iwi have been living in this area uninterrupted for 800 years – considered the site of the longest constant occcupation in New Zealand history. Consequently, the area is deemed one of the most important archaeological sites in the country, rich in evidence of agriculture, housing and studded with burial caves.

So, understandably, iwi feel that the land has been taken from them once again, as the Wallace family has sold the land to the majority foreign-owned company, Fletcher Living. Despite firm opposition from the then Manukau Council to have the block rezoned from rural land, this was ignored by Auckland Council and the government, in the drive to designate Special Housing Areas wherever possible.

The land has been rezoned by Auckland Council and can now be developed by Fletcher Living.

But the local community is mounting a spirited campaign to have this decision overturned – called SOUL – Save Our Unique Landscape, they have increasing support from local residents, the Local Community Board, their local MP, the Maori Party, and Auckland Council’s Heritage Advisory Panel, to name a few.

The proposed SHA is immediately adjacent to the Otuataua Stonefields Reserve (jointly managed by DOC and Auckland Council), and established in 2001. At the opening ceremony, Nick Smith, then Minister of Conservation, talked about the iconic landscape and it’s richness of history and archaeology, statingt that the surrounding land must never be built on. With a change of ministry, he is now Minister of Housing, and seems to have forgotten his previous appreciation of the area’s uniqueness.

There is an excellent in depth examination of the issues in the Listener magazine, dated 4 June 2016.

And in the Listener dated 18 June there is a photo essay on the Otuataua stone gardens.

And the SOUL campaign also runs a busy Facebook page – join up to show support.

Protests at the council hearing to rezone the land for an SHA, February 2016 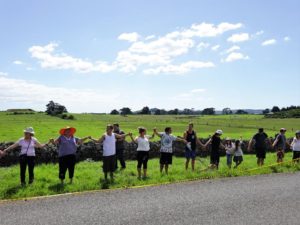 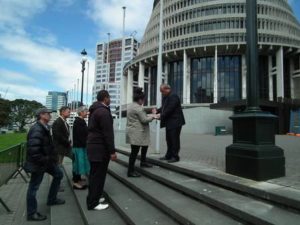