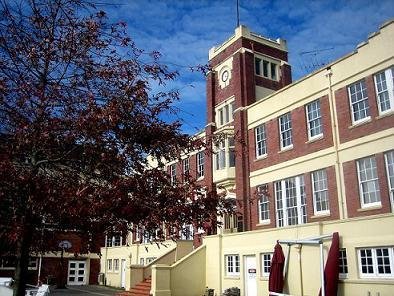 King’s School has approval from the council to demolish the Hanna Block to make way for the construction of a new four storey 19 classroom block to meet 21st century student needs. The Hanna Block was originally built as a two storey dormitory block with bedrooms, bathrooms, changing rooms, workshops, games rooms and classrooms. It was built in 1936 and is named after Sam Hanna who was Chairman of the Board during the 1940s.

The following article also appeared in the New Zealand Herald:

King’s School in Auckland is to replace its old boarding house and clock tower with a $30 million glass-fronted building with views of Rangitoto Island. Earthquake concerns are behind the plan to demolish the Hanna Block and build a 5000sq m, four-storey, 19-classroom building at the Remuera primary school. Investigations into the earthquake safety of the school buildings found that the old block, built in the 1930s, complied with the new code but was compromised because of corrosion in its steel components. Principal Tony Sissons said it would cost $10 million to repair the block. “We decided that probably wasn’t the best use of our funds, especially as that would mean we would be returning it to what it was built as – a boarding school arrangement and we don’t have boarders any longer.” Instead Mr Sissons said the school had decided to invest in a new block that would better suit the students’ needs. “There is an opportunity now to invest wisely for the future … into a 21st century building that will offer its students an environment that embraces new standards in teaching and learning.” Mr Sissons said each classroom would have open and flexible teaching spaces to allow students to work on individual and group projects. There would also be several new music rooms. An artist’s impression of the new Centennial Building shows a contemporary-style block with a predominantly glass exterior that gives clear views. Plans of the interior show open spaces, with high ceilings and colourful furniture. But not everyone is happy.

An artist’s Impression of the $30 million Centennial Building.

A former pupil is disappointed to see the clock tower go. “It’s a loss of a heritage icon … to be bowling it down is a waste.” Mr Sissons acknowledged these concerns but said the new design would retain a tower component and would also incorporate some of the historical aspects of the Hanna Block. “We have saved the clock, we particularly wanted to save that and it will find a new home somewhere in the building.” He added that a robust review of the decision to demolish the block had been carried out – including going to the Hanna family. The block was named after Sam Hanna, chairman of the school board in the 1940s. Auckland Council manager heritage Noel Reardon confirmed the block was not under heritage protection. Construction is due to start in February.

The information in this posting has been reproduced with thanks from the Remuera Heritage website.