Posted on September 16, 2011 Posted By: gwilson Categories: Past Events

The 150 year anniversary of Drury tramway

Civic Trust Board Member Munroe Graham instigated an informal BYO picnic gathering on Sunday May 6th at Drury Domain, near the library. This enjoyable gathering on a sunny afternoon of around 20 train and heritage enthusiasts, commemorated the opening of this tramway, the story of which is set out in brief below.

On 1 May 1862 the first of three tramways opened in Drury. This was a horse drawn tramway and ran about 4.5 km from a coal mine in the hills east of Drury to the port. The rails were timber (Rimu) rather than steel and built to standard 1435mm gauge. There was never any intention of carrying passengers. 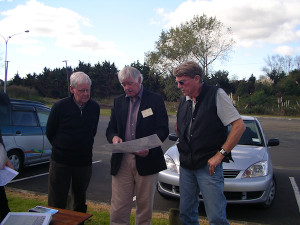 The mine was operated by the Waihoihoi Coal Company, which had been producing on a small-scale using horse transport to get the coal from the mine in the Hunua foothills east of Drury to the port, thence to Onehunga. The purpose of the tramway was to reduce the cost of transport.

Plans were made, even as the tramway was being constructed, for the possibility of a full rail connection from Auckland to Drury and this line actually got under way a few years later. The decision to connect Auckland with Drury was probably a political one, which would have had more to do with opening up the Waikato than the provision of second-grade coal to a smallish market, already well served with first grade coal from Newcastle NSW and elsewhere.

Ultimately, the importance of this tramway was that it acted as a trigger for the commencement of a conventional Auckland-Drury railway a few years later and this, although later delayed, represented the commencement of the North Island main trunk line.

The mine and its tramway did not last long in full production, possibly less than a year, interrupted by war, with sporadic subsequent operation to 1866, by which time it appears to have finally closed down.

Later tramways of 1878 and 1905 commenced from the then railway station immediately north of Waihoihoi Road, south-east towards present day Drury Hills Road.